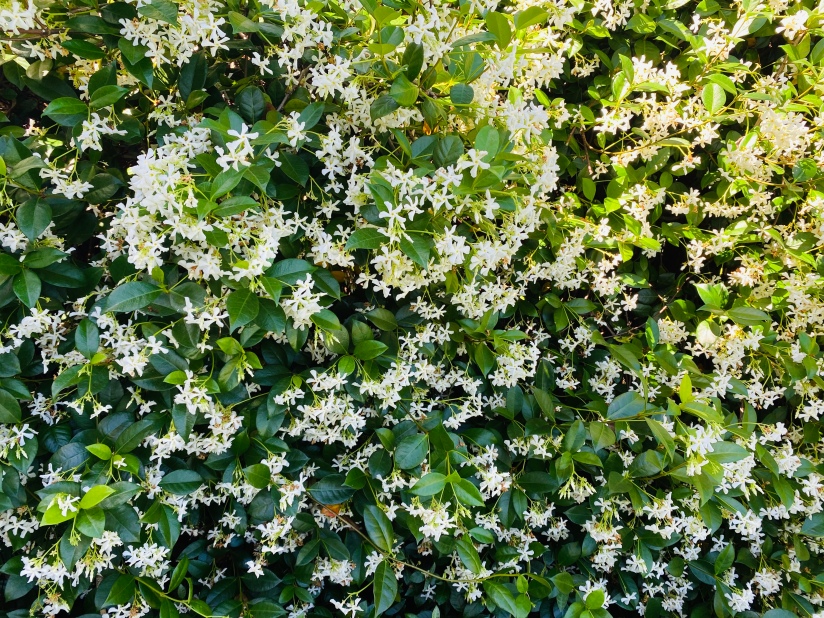 Lean into your screen. Now inhale. Can you smell it? I really wish you could right now. Imagine sitting on my patio together as the sweet aroma of jasmine gently drifts past us. This lovely plant is growing on the fence in my backyard and it’s in full bloom. I’ve been sitting outside in the mornings with my coffee, my bible, and the delightful scent of jasmine. What a great way to start the day.

Jasmine is one of my all time favorite flowers. Clusters of delicate white flowers releasing their pleasing scent. The smell is intoxicating. I am reminded of my childhood in California as the enchanting fragrance of jasmine is in the air. Scent is the strongest of our human senses.

Two people can smell the same thing with different results. To one it can be offensive, and to the other it’s the best thing they have ever smelled. I can’t imagine many being offended at the smell of jasmine, but I’m sure they exist.

The Bible tells us that as Christians we are the aroma of Christ. What does that mean?

14 But thanks be to God, who always leads us in triumphal procession in Christ and through us spreads everywhere the fragrance of the knowledge of him. 15 For we are to God the pleasing aroma of Christ among those who are being saved and those who are perishing. 16 To the one we are the smell of death; to the other, the fragrance of life. And who is equal to such a task?

Paul used the analagy of a triumphal procession in a Roman military parade to compare Christians to non-Christians.

Back in the day, when a Roman general had a victory on the battelfield there was a great parade through the streets of Rome. They had a very specific route taken through the city, all to show off their triumph. Senators, and state officials led the way, followed by trumpeters, and carts loaded with the spoils of war. There were musicians, and exoctic animals from the defeated enemy. Bulls and oxen were brought along for sacrifice to their Roman gods. Infantry, and the general’s adult sons were also included. It was over the top.

Also in this great procession, were the captives of war. The enemy leaders were paraded through the streets in chains on their way to prison, and ultimately their execution. Garlands of flowers were carried and incense was burned by the Roman priests. The aroma was sweet for the victors, and meant death for the captives. Same smell, different meaning.

The message of Jesus Christ is a death sentence for those who reject it. That same message is life for those who recieve Christ as Savior. The same beautiful fragrance, yet death for one and triumph for the other.

17 For God did not send his Son into the world to condemn the world, but to save the world through him. 18 Whoever believes in him is not condemned, but whoever does not believe stands condemned already because they have not believed in the name of God’s one and only Son. 19 This is the verdict: Light has come into the world, but people loved darkness instead of light because their deeds were evil. 20 Everyone who does evil hates the light, and will not come into the light for fear that their deeds will be exposed. 21 But whoever lives by the truth comes into the light, so that it may be seen plainly that what they have done has been done in the sight of God.

Christ followers get the awesome privilege to spread the fragrance of life. This is not on our own ability. It is God at work in every Believer, sharing His sweet, glorious aroma. Even better than the scent of jasmine.

Jesus loves you and wants life for you. I pray you know Him as your Savior.

The Lord is not slow in keeping his promise, as some understand slowness. Instead he is patient with you, not wanting anyone to perish, but everyone to come to repentance.

P.S. If you need prayer go to my contact page. God bless you!